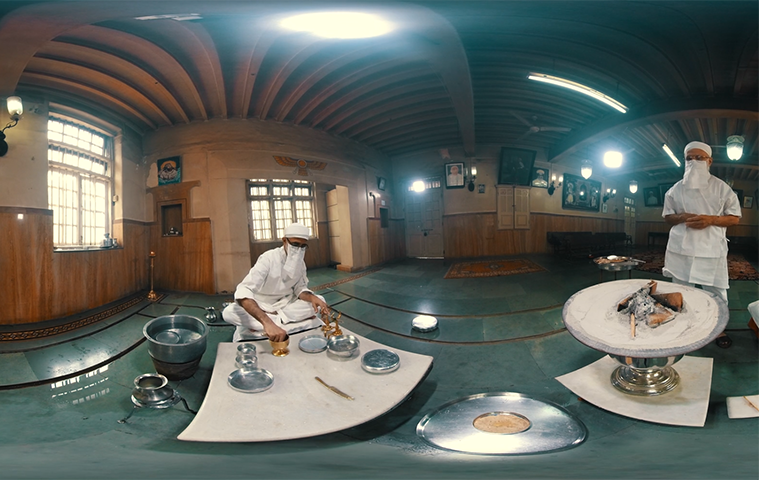 In November 2017, a second performance of the Yasna was shot in 8K on a Virtual Reality, 360-degree camera. For the first time, this provides audiences with a fully immersive VR experience of the ritual.

To achieve this, a spherical camera with six lenses placed at the centre of the ritual precinct has been used. The camera produced six films which were stitched together in post-production, thus creating a fully immersive experience when watched with a 3D headset. Visually, the observer is transported into the centre of the ritual area. The VR camera shoots in astounding 8K (ultra-high definition), enabling the viewer to closely examine minuscule details of the performance and to watch the ritual from multiple angles at the same time, creating a unique platform for in-depth analysis.

A 4-minute film has been made and the MUYA team showcased it at different occasions. This short extract, available by clicking on the top right corner "visit website", provides a taster of the Yasna ritual with the voiceover of a Zoroastrian priest explaining that the Yasna is the story of the human soul travelling through the universe. The ritual begins with the act of fetching water from the well - just as the human soul comes into the world - and ends with the libation being poured back to the well - in the same way as our souls return to where they came from.

The full version of the Paragnā and the Yasna is available via the link on the top right corner.