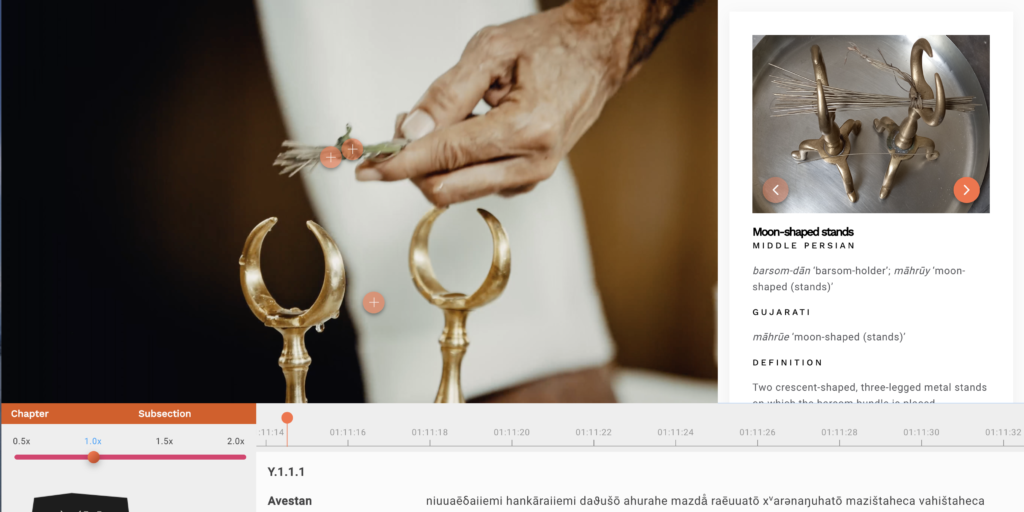 This interactive film has been possible thanks to the work of the MUYA team and its partners:

The following three videos provide short explanation on the different components of the interactive film. Below each video appears the transcription.

To watch the film from the beginning click on the “Play” icon. Alternatively, you can jump directly to a specific chapter indicated by an orange dot on the timeline. When hovering over one of the orange dots, a small window opens indicating the chapter. It is also possible to select a specific chapter from the dropdown menu to the left of the screen by clicking on “Chapter”. Select the subsection by clicking on “Stanza & Subsection”. In the dropdown menu which opens within the stanza & subsection tab, the first number is that of the chapter, the second that of the stanza, and the third that of the subsection within a stanza. The numbers of the chapters and stanzas of the Yasna are those of the edition of the Avesta by Karl Friedrich Geldner. The subsections are specific to this film and have been introduced to facilitate the alignment of the recitation text and the ritual actions. As to the numbering of chapters in the Paragnā, chapters 5–10 agree with the numbers of Anklesaria 1888, but the numbers of chapters 0–4 show differences, partly due to the flexibility of the order of actions in the Paragnā. All chapters of the Paragnā have been internally divided into subsections whose numbers have been introduced by the MUYA project.

You can watch the film at different speeds by moving the dot on the speed line below the Chapter and Stanza & Subsection tabs. The default speed is 1.0x, and you can choose a slower speed at a rate up to 0.5x or a greater speed up to 2.0x.

The window below the film provides two types of information. The first row is a transcription in Roman letters of the text recited by the priests. The Avestan text is provided in a simplified transcription (replacing some of the characters with more complex diacritics that are commonly used in Avestan studies by ‘simple’ characters). The language of the recitation text is indicated to the left of the transcribed text. Most of the recited text is in Avestan, as in the example shown here, but occasionally in Pazand as, for example, in Y.11.11.3.

The next row with text in orange colour provides an English rendering of the ritual directions in Gujarati, taken from Anklesaria 1888, and in Middle Persian, taken from the Yasna manuscript 5_Arundel 54 of the British Library. These are the ritual actions specific to the subsection in question. The sample shown provides the ritual directions in both Gujarati and Middle Persian. This way of displaying the material enables the viewer to compare the Indian and Iranian traditions of the Yasna as attested in the written tradition, while also being able to compare both traditions with the current ritual practice as shown in the film. The space is left blank if no ritual directions are available in either or both texts.

An English translation of the recitation text will be added in the near future.

The encyclopaedia counts 60 entries. Concerning the tracing, the position of 50 items has been traced throughout the 5 hours of the film, meaning one can stop the film at any moment and know what items are currently there.

This film provides an explanation of 60 objects and agents involved in the performance of the ritual, ranging from ‘assistant priest’ to ‘goat’, ‘mortar’ and the ‘vase-like jug’. They are highlighted by an orange dot with a plus-symbol at its centre. These dots appear at any point whenever you pause the film. When hovering the curser over the orange dot, the item marked by the dot is highlighted by a frame surrounding it. Click on the dot, and a window opens to the right of the screen displaying one or several images of the item, its name, a description of its physical form and of its use and function in the ritual. Bibliographical references pertaining to the entry and cross-references to related entries in the film are provided at the end. You can navigate to any other entry within the encyclopaedia by clicking on List of entries at the very bottom. You can also navigate to the encyclopaedia entry of any other object by clicking on any of the other orange dots displayed on the screen of the film when it is paused. The position of 50 items has been traced throughout the almost five hours of the film. This means that you can pause the film at any moment and retrieve information on any object or agent involved in that particular scene.

Components of the film

The recording of this film was made in November 2017 at the Dadar Athornan Institute in Mumbai. The film team was Anna and Remi Sowa of Chouette Films. They filmed both the preparatory Paragnā and a full Yasna ceremony and edited it afterwards at SOAS, University of London.

The interactive film consists of three main elements: the subtitles, the encyclopaedia providing a list of 60 items and their description, and the detection of 50 items in the film.

Following guidance provided by Mandana Seyfeddinipur, the annotation of the video was done with the software ELAN, a multimedia tool developed at the Max Planck Institute for Psycholinguistics in Nijmegen. The general structure of the ELAN file is the following:

The annotations consist of the following elements:

PDF of the Paragnā text

A similar file containing the Yasna will be made available soon.

Remarks on the Avestan text

The Avestan text provided for the Yasna is that of Geldner’s edition with the following exceptions: Firstly, the dedication of the date (month and day) corresponds to the date of the performance captured by the film, hence the dedication is to Vohu Manah and Tištriia (Y.1.11, Y.2.11, Y.3.13, Y.4.16, Y.6.10, Y.7.13, Y.17.10, Y.22.13, Y.24.21, Y.59.10, Y.66.10) rather than to Ahura Mazdā and the Frauuaṣ̌is as in Geldner’s edition. Secondly, the Avestan text recited shows some fluctuations that are typical of the Indian tradition, and these have been reproduced in the subtitles. The variations include:

The performance recorded in the film being a live event, the priest may correct himself during the recitation. In this case, the subtitles provide the expected text, and the listener may notice the correction while listening and reading the subtitles. For example, in Y.34.10, the priest recites the beginning of the stanza and then repeats Y.34.6–10. Here only Y.34.10 is given as subtitle throughout this irregular repetition. The recitation of the Gāthās from memory is particularly challenging as the text is extremely difficult and at times contains similar portions. While the recitation as recorded in the film is admirably correct and deserves our highest respect, on very rare occasions a portion of text has been omitted during the recitation. These omitted sections have been noted in the transcription by the means of square brackets [], as for example in Y.45.3–4:

The encyclopaedia provides 60 entries, including two general entries: the Paragnā and the Yasna. Each object is shown in one or more images. The different parts of an entry provide the following information:

Depending on the entry, information may not be available for all categories. In such cases the category is omitted in the Encyclopaedia.

The Detection of items was developed by Cláudia Ribeiro and Céline Redard. When the viewer pauses the film, orange dots with a plus-sign in the middle appear. Each dot corresponds to an item on which encyclopaedic information is provided.

By clicking on a specific dot, a frame surrounds the item as here with the goat (Par 2.2.1):

Clicking on an item directly opens the corresponding encyclopaedia’s entry in the right-side panel.

Description of the process for the detection

The following paragraphs provide a short-simplified description of the process for detecting the items.

Images extracted from the film have been annotated using the software Roboflow. Each item is framed by a tight rectangle bounding box and linked with a specific ID.

One difficulty in the annotation process has been that the same view should contain the same items annotated if they are visible. Hence, the annotater should remember which items are on each view.

Furthermore, depending on the view, not all the items are annotated, especially because an item is not visible enough. For example, with the large view, it is difficult to see the items and to know which one is what without knowing the ritual and what is expected at that moment.

The annotated images are used to train working computer vision model and this model allows to generate a video with the items detected during the whole film as shown in the following video extract.

Each generated version has been proofread to identify errors such as an item wrongly detected or an item not detected. For each issue, one or more images had to be annotated. The whole process was repeated multiple times. Around 30 versions have been made before reaching a result for which the accuracy is around 98%. In order to achieve this, 2060 images (700 images for the Paragnā and 1360 for the Yasna) corresponding to 32’000 bounding boxes have been annotated. Reaching 100% is almost impossible for such a length of film and with items so similar (like the two priests, or the different cups). If one finds an item with the wrong label, one should play the film on for a second. Any remaining inaccuracies should be minimal and barely noticeable.

It would not have been possible to make this film without the support and collaboration of Ervad Ramiyar Karanjia, Principal of the Dadar Athornan Institute in Mumbai, and of our two priests who performed the ceremony: the late Ervad Asphandiarji Dadachanji and Ervad Adil Bhesania. Both priests patiently performed individual scenes repeatedly. We are profoundly thankful to them. Sadly, Ervad Asphandiarji Dadachanji passed away on 22 October 2021. We dedicate this film to his memory.