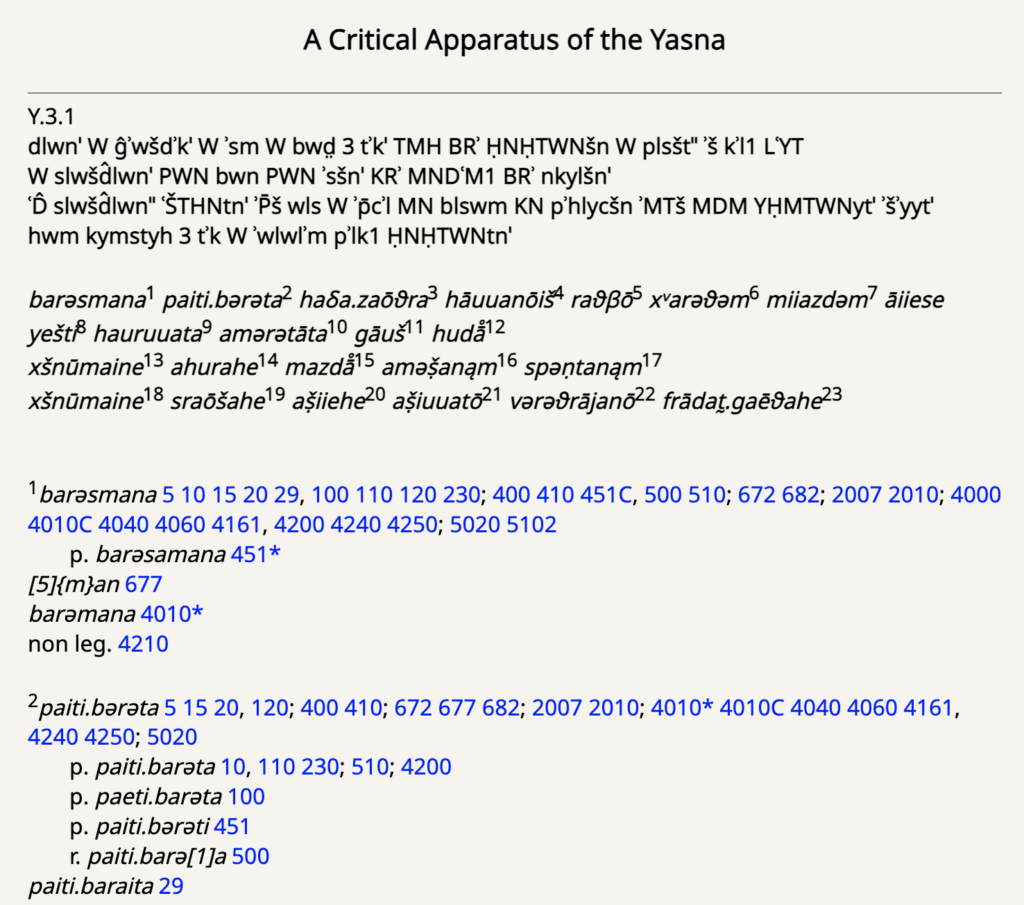 Edition and transcriptions of the Yasna

Edited for the Multimedia Yasna Project

The work of transcribing and editing has been undertaken by:

The transcriptions and the editions are available at the “Editions and Transcriptions” link on the top right corner, each under a Creative Commons attribution license (CC BY 4.0). The selected manuscripts are also listed in the list of witnesses.

Full-text transcriptions of the manuscripts selected for the editions were made using the Online Transcription Editor (OTE) developed by Martin Sievers, with an offline Electron version provided by Catherine Smith. The OTE automatically encodes the text in Extensible Markup Language (XML) according to the fifth version of the Guidelines of the Text Encoding Initiative (TEI P5). By relieving the transcriber from manually encoding TEI tags directly, it ensures TEI compliance and consistent data capture.

The text has been transcribed exactly as it appears in the manuscripts with their original orthography and any textual corrections. Unclear, illegible or lacunose text is also marked as such. The full-text transcriptions of the manuscripts are available for examination of the context of a word and for comparison with the collation.

Once transcribed, the manuscript texts were collated with each other, section-by-section, using the software CollateX. The initial editing of the apparatus involved multiple stages, using the Collation Editor software developed by Catherine J. Smith (Institute for Textual Scholarship and Electronic Editing University of Birmingham).

For a description of the editorial process, see pages 4–83 in: Redard, Céline. 2021. The Srōš Drōn – Yasna 3 to 8. A Critical Edition with Ritual Commentaries and Glossary (Handbook of Oriental Studies – Corpus Avesticum 32/3). Leiden - New York: Brill.

The manuscripts have been selected according to their type and date. Each edition of Avestan text uses around 30 manuscripts while the Sanskrit edition is based on 8 manuscripts. The following tables list the manuscripts transcribed and collated in the MUYA project, providing their type, their name, their location, and finally their date when known.

For the Sanskrit version of the Yasna, the following manuscripts have been selected:

For more details on these manuscripts, see:

Khanizadeh, Mehrbod. 2021. Zoroastrian ritual and exegetical traditions: the case of the Iranian Pahlavi Yasna. The Bulletin of the School of Oriental and African Studies 84.3, 469–504 [available online].

The transcriptions and apparatus are available at the “Edition and Transcriptions” link on the top right corner. The titles of the different projects of MUYA are displayed side by side. The full-text transcriptions and the editions with critical apparatus of a particular project are accessed by selecting one of them.

The display of the manuscript transcriptions is as follows:

An editorial note appears as Note written in blue and raised. Hovering over it will provide the text of the note.

The digital editions with edited text and text-critical apparatus are accessed by selecting “Apparatus” from a particular sub-project.

The Avestan edited text is in italics. Middle Persian ritual directions, in transliteration, are in normal type. The readings in the apparatus appear in italics when in Avestan, and in normal type when in another language.

In the main edited text, words with variant readings are followed by a raised number, which refers to a note placed below the edited text. The numbering starts at ¹ within each stanza. If two terms have been collated together, they are presented in the critical apparatus under a single number, written after each of them in the main edited text.

To unburden the critical apparatus from readings which are not meaningful for the transmission, the readings, whenever possible, have been regularised as phonetic (p.), orthographic (o.), orthographic-phonetic (op.), reconstructed (r.) or abbreviation to the main variant. The MUYA team has defined regularisation rules for this purpose.

The manuscripts are numbered according to the system of Cantera (Vers une édition de la liturgie longue: pensées et travaux préliminaires, 2014, 406–417). In the apparatus, the manuscripts are listed in numerical order within one variant reading. A semi-colon separates different classes of manuscripts, and a comma separates the Iranian from the Indian manuscripts within the same class. Clicking on the siglum of a manuscript opens a new window taking the user to the manuscript transcription and showing the word in the context of that particular manuscript.

The critical apparatus is arranged as follows:

The following sigla and abbreviations are used:

Edition and transcriptions of the Yasna